PepsiCo’s Shares Have Stayed Flat in 2021: Can Q2 Earnings Change That?

by Cameron Santillan
in Polkadot
0

PepsiCo‘s (NASDAQ: PEP) stock is right around where it started in 2021. The stock fell initially in the first few months of the year and then bounced back to where it started. That’s a meaningful underperformance to the SPDR S&P 500 ETF (NYSEMKT: SPY), which is up 15% year to date.

Part of the cause could be worry from investors that PepsiCo’s business will not fare as well when economies reopen. The company did well when folks were staying home and consuming more snacks and beverages there. Another cause for underperformance could be PepsiCo’s announcement that it is finished buying back shares for the rest of the year.

Normally, share repurchase announcements are followed by stock price gains. Still, if PepsiCo can report solid results for the second quarter amid economic reopenings, it could assuage some investor concerns.

The bulk of PepsiCo’s operating profits come from its Frito-Lay snack segment. In the first quarter, of the $2.3 billion in operating profits, $1.2 billion was from Frito-Lay. As folks were cooped up in their homes, they were only several feet away from the kitchen. Understandably, the proximity made reaching for a salty snack easier. Here’s what CEO Ramon Laguarta said in the first-quarter conference call’s opening remarks: “From a channel perspective, the large-format channel delivered strong net revenue growth as it continued to benefit from at-home consumption trends while the foodservice channel continued to decline at a double-digit rate.”

The fact that overall revenue increased by 6.8% despite limited activity at restaurants demonstrates PepsiCo’s lack of exposure to the industry. The area is where rival Coca-Cola (NYSE: KO) excels. Through exclusive agreements with restaurant chains, Coca-Cola owns a larger market share in the category. As economies reopen and folks visit restaurants more often, PepsiCo is at risk of losing market share to Coca-Cola.

Still, despite the disadvantages, management expects to grow revenue by mid-single digits in 2021 and earnings per share by high single digits. 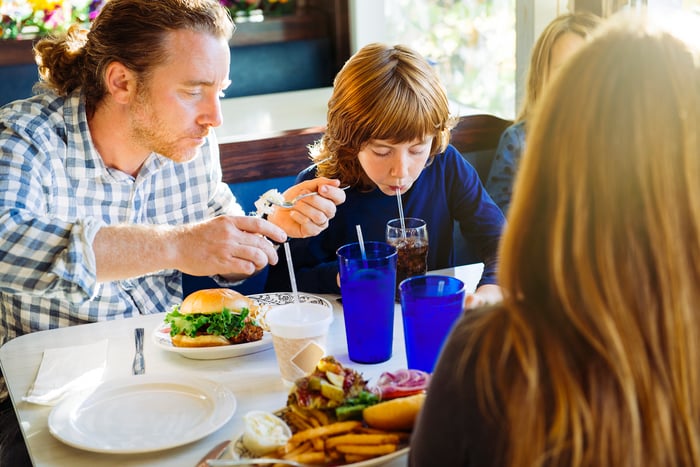 What this could mean for shareholders

Analysts on Wall Street expect PepsiCo to report revenue of $17.94 billion and earnings per share (EPS) of $1.52. If PepsiCo’s second-quarter results do come in as estimated, it would increase by 16.7% and 15%, respectively.

Interestingly, estimates on Wall Street for the second quarter are far ahead of PepsiCo management growth forecasts for revenue and EPS. That could lead to volatile trading after earnings are released on July 13. It also raises the possibility that when PepsiCo reports second-quarter earnings, it will also raise the 2021 guidance. In the latter scenario, it could cause shares of PepsiCo to rise.

It’s becoming clear that economic life is not going back exactly to the way things were before the pandemic. Since this is the first quarter of earnings results for PepsiCo during large-scale economic reopenings, investors can gain information on how the company will fare in a post-pandemic world.

10 stocks we like better than PepsiCo
When our award-winning analyst team has a stock tip, it can pay to listen. After all, the newsletter they have run for over a decade, Motley Fool Stock Advisor, has tripled the market.*

They just revealed what they believe are the ten best stocks for investors to buy right now… and PepsiCo wasn’t one of them! That’s right — they think these 10 stocks are even better buys.

No Result
View All Result

© BlockChainHustler - All Rights Are Reserved